Ok – guess what I did today? Let me give you three clues. I did something that was reckless, fearless and somewhat stupid.. I will divulge all to you.

Ok – I had decided, some months ago, that due to taking all that time off because of my chest infection, I would run a half-marathon today instead of my planned marathon. Wise decision. Right? But I didn’t get my buns in gear and didn’t e-mail the race organisers that I had considered doing this. Not until this week. And guess what? They told me the half was full, as was the transport to the start (the race started and finished in a different place..). So I spent the week fruitlessly coming up with ways to get to the start. My friend Sally and I were going to drive to the race together but I contemplated driving in convoy (how boring!) or trying to find someone to give me a ride. Husband would have taken me but was in charge of children and also had to take them to a party (near to the race, as it happened).

So yesterday lunchtime I decided to throw in my big guns. I went onto the Runnersworld website to the Forum thread for the White Peak marathon and half and offered up my bribe – homemade oatmeal raisin or chocolate chip cookies for anyone who would transport me to the half start. No takers. No takers! My biscuits are fabulous! And the oats make them good! Right? Right. Anyway they obviously didn’t sell themselves. Then someone who I have never met posted a message saying “why don’t you take it easy and just run the full? You’ve got a place on THAT bus?”. And so, readers, that’s what I resolved to do. I told no-one except my husband (who doesn’t run and didn’t realise the implications of someone SERIOUSLY undertrained running a marathon) and Sally (who thinks I’m nuts anyway so it all proves her point). Which she is right about, by the way. 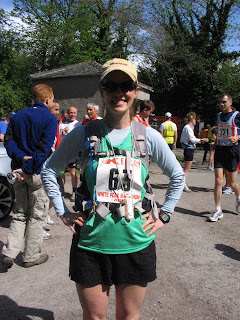 So guess who lined up for the marathon today? me. Bright and sprightly and perky. My new Camelbak backpack on, mobile with me for disasters, plenty of powerbars – I will confess to you that I thought I might amaze myself.
Friends of mine (mostly men..) have run marathons without much training and I thought that maybe I was being too much of a stick-in-the-mud sticking to Uncle Hal’s programs and needed to “live a little”. Well, my friends, I lived a lot. I feel like I’ve lived a lifetime. On the upside – the race was on traffic-less roads, the weather was ok and there were only 200 other marathoners registered. I met some nice people, had some very interesting conversations. So much for running Oprah. On the downside – guys! I can’t run a marathon without training! This hurt. SO MUCH! There were some mean and nasty steep downhills and my knees are toast! I found it hard. I walked! I have never walked! I wasn’t able to slow down enough – I was either running a 10:30 minute mile or walking. OK OK. Another confession. I thought about blogging about my decision last night but knew that you – wiser friends of mine in the blogosphere – would tell me that I was nuts and shouldn’t do it.

Upshot? OK I finished in 4:49. Not too bad – NYC took me 6 minutes more but I was well over 30 minutes off my Chicago time. But I tell you guys – it was not fun. Miles 21-26.2 were horrible. And I’ve never had that before. Training consistently has meant that I have always been more or less confident and capable during marathons. Today that was not the case. So a lesson has been learned – to everyone’s shock and awe Petra does not run fast or enjoyable marathons without training properly. Hear me girlfriends? Don’t do what I did.

Finally though – despite all of the above I am happy tonight. Grinning, in fact. I had a rubbish week. I don’t think I’m dealing well with the thought of my little boy going to school in September and losing a big part of my mom-job at home. I’ve been horrible – moody, grumpy, self-doubting, angry – you name it, I have been it. My family has show extraordinary patience with the witch, I can tell you. But doing something stupid and irresponsible brought back my inner naughtiness and it’s perked me up no end. I won’t do it again – the pain is too much! My legs are unmoveable and stairs scare me – but, strangely and stupidly enough – it was what I needed. I laughed with myself today, and I haven’t done that for a long time..

Keep running, keep training, and stick to your schedules, my friends! I am going to have a hot bath and then meet my friends Ben and Jerry in bed with a book. I know how to live.. or not?